All the heating and hot water for the Aboyne Campus (Aboyne Primary School, Aboyne Academy & the Aboyne Community Centre & Swimming pool) is provided by a biomass boiler.

The project was financed under the Energy Services Contract (ESCo) with Buccleuch Bioenergy acting as the principle contractor.

The boiler is a 600kW Kohlbach boiler which is operated on wood chips sourced from a sawmill roughly 7km from the campus.

A spin off of the boiler system has been the use of data from the boiler in two projects, one a Maths Faculty project and the second an Interdisciplinary project involving Maths, Geography & Science.

The graph below shows how effective the boiler was in 2010. While there had been some use of fuel oil over the year, this was significantly reduced and usually only used in exceptional weather conditions or when the boiler was serviced. 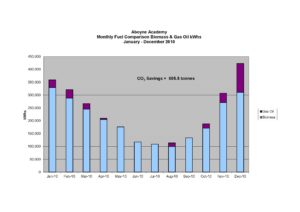